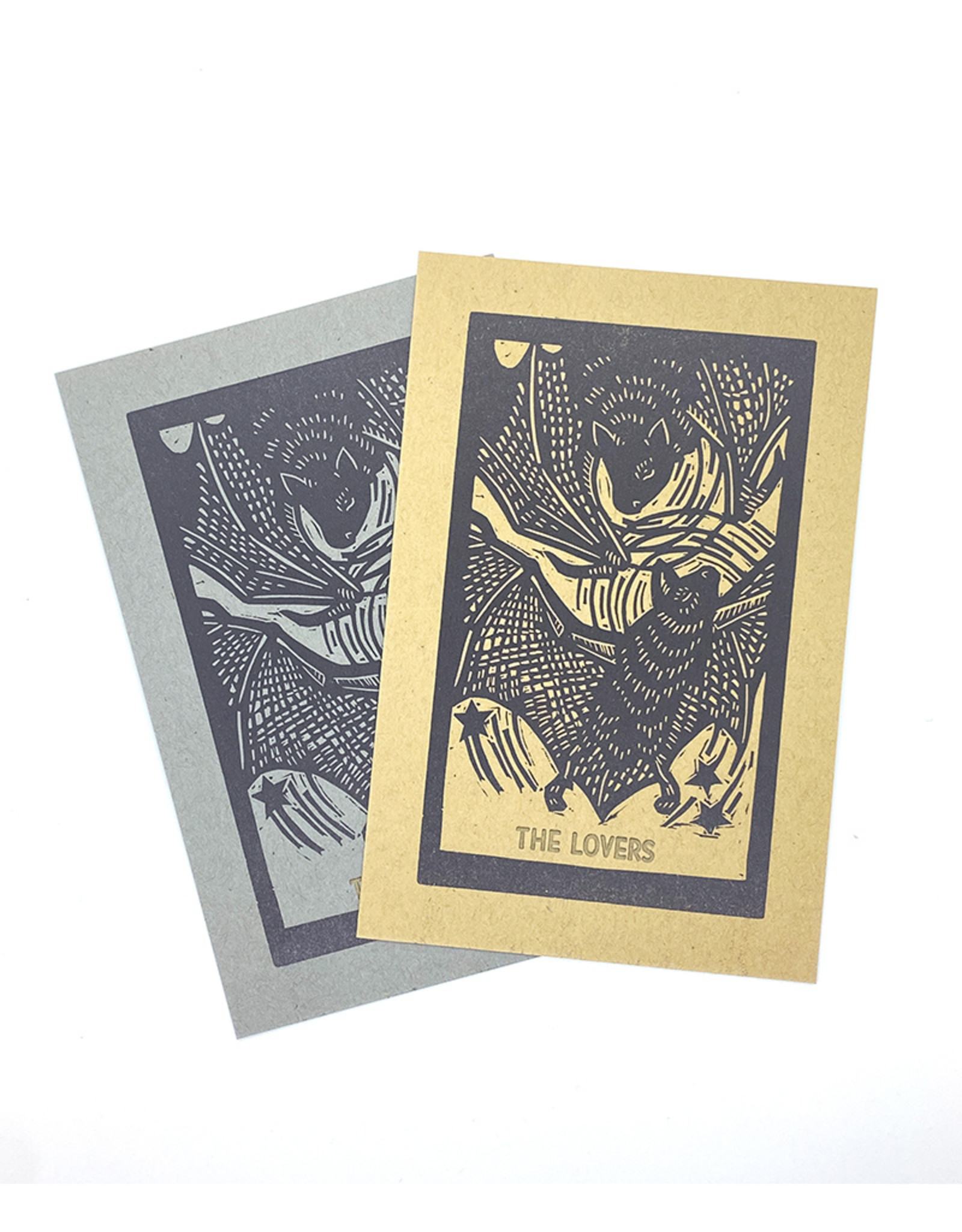 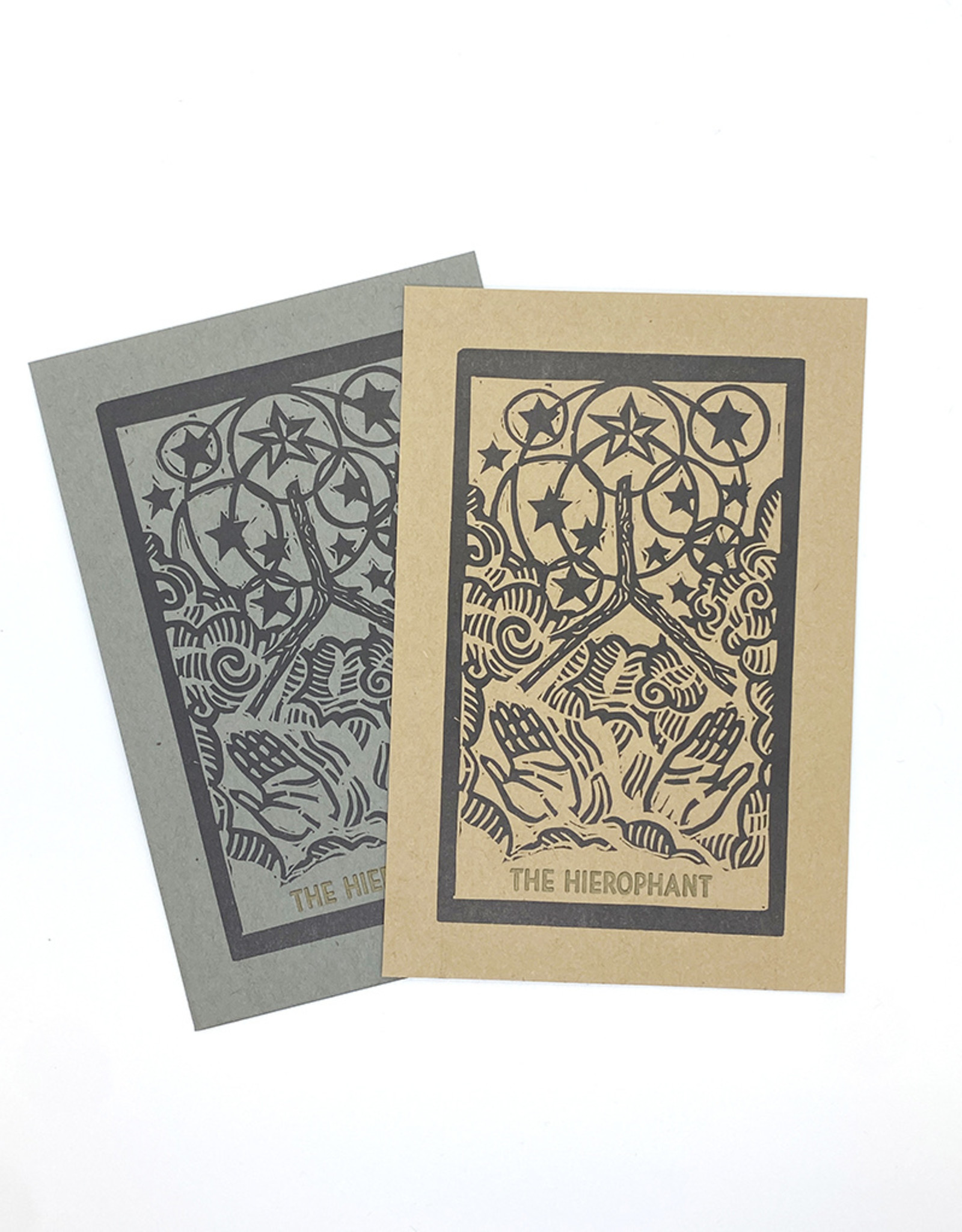 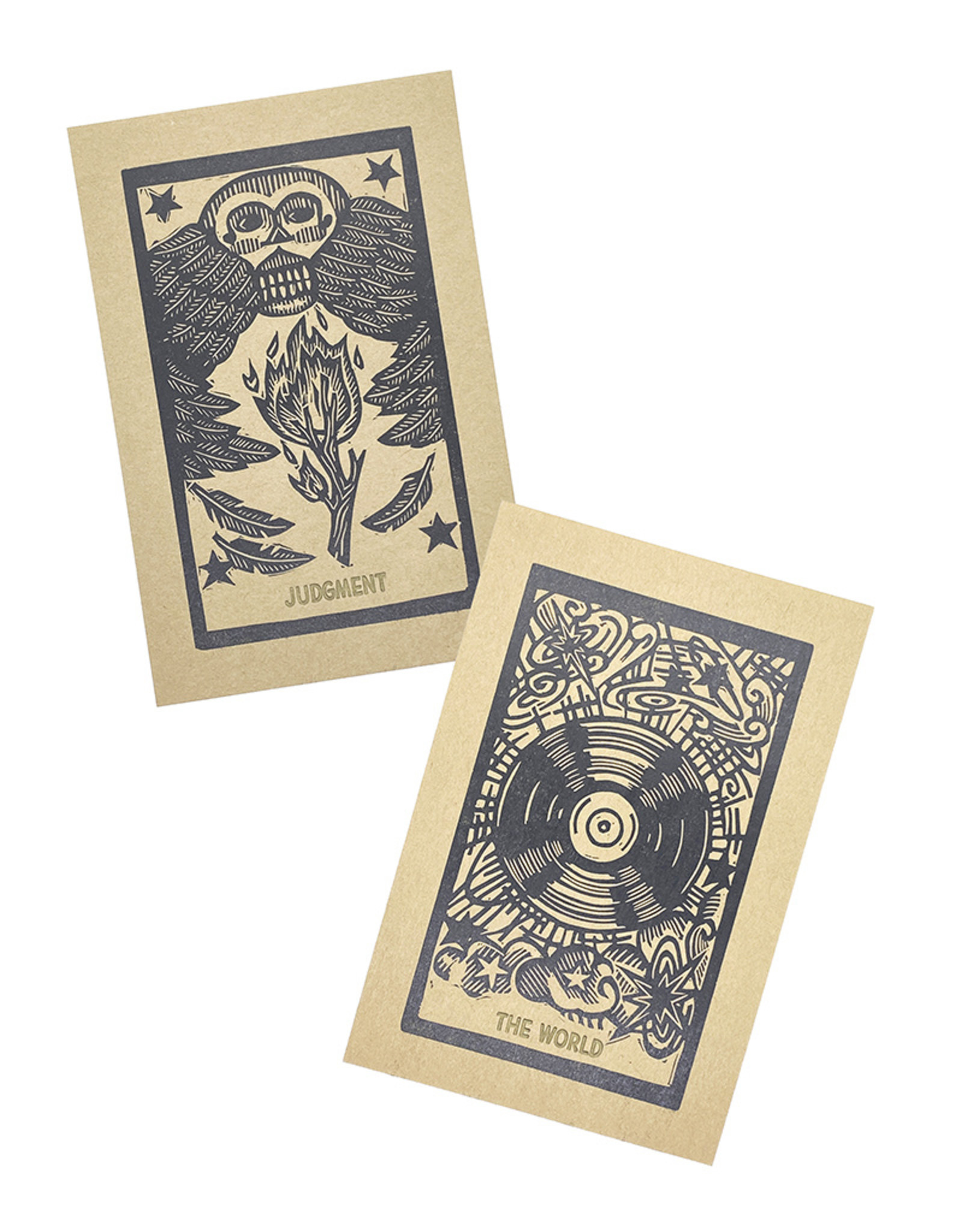 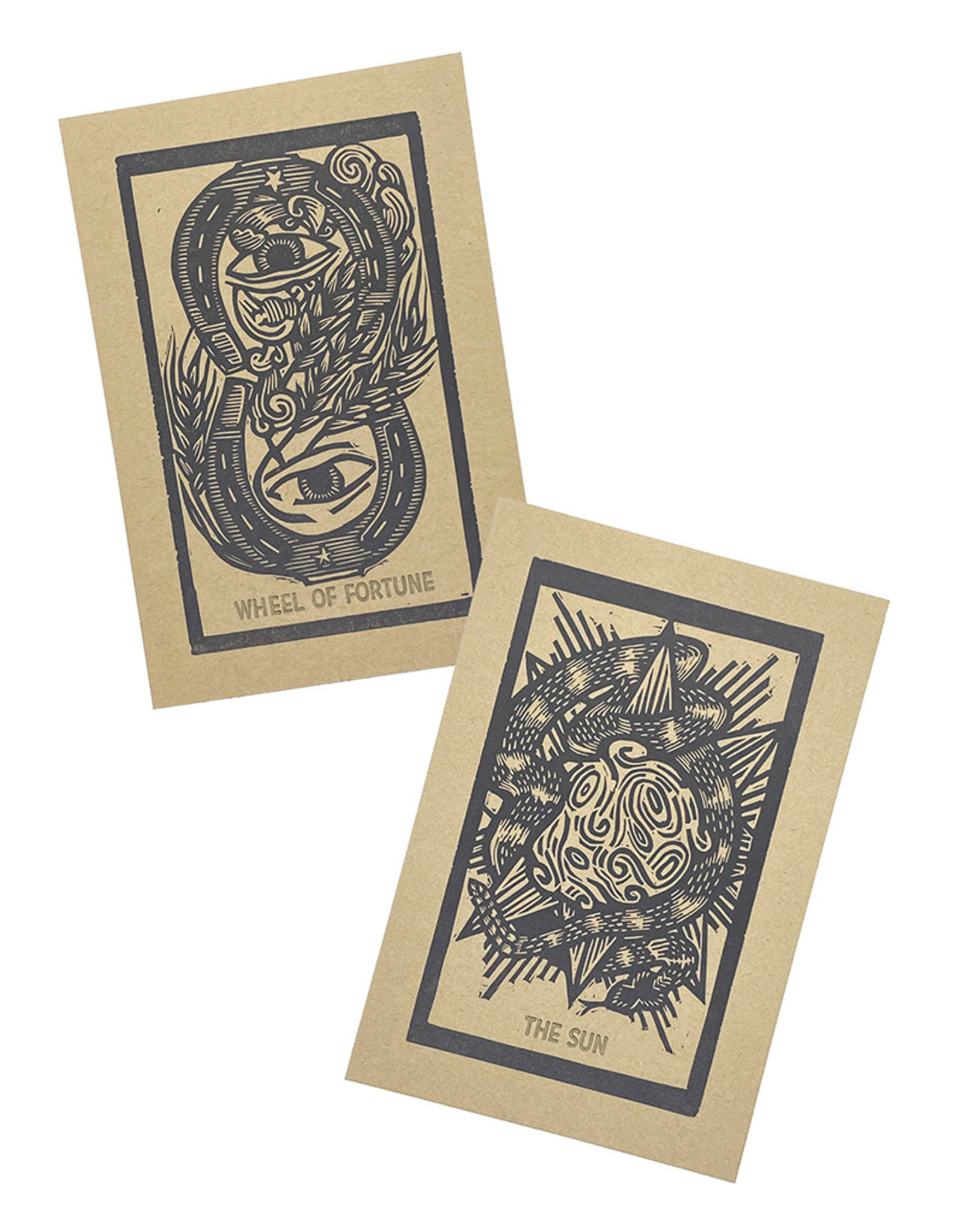 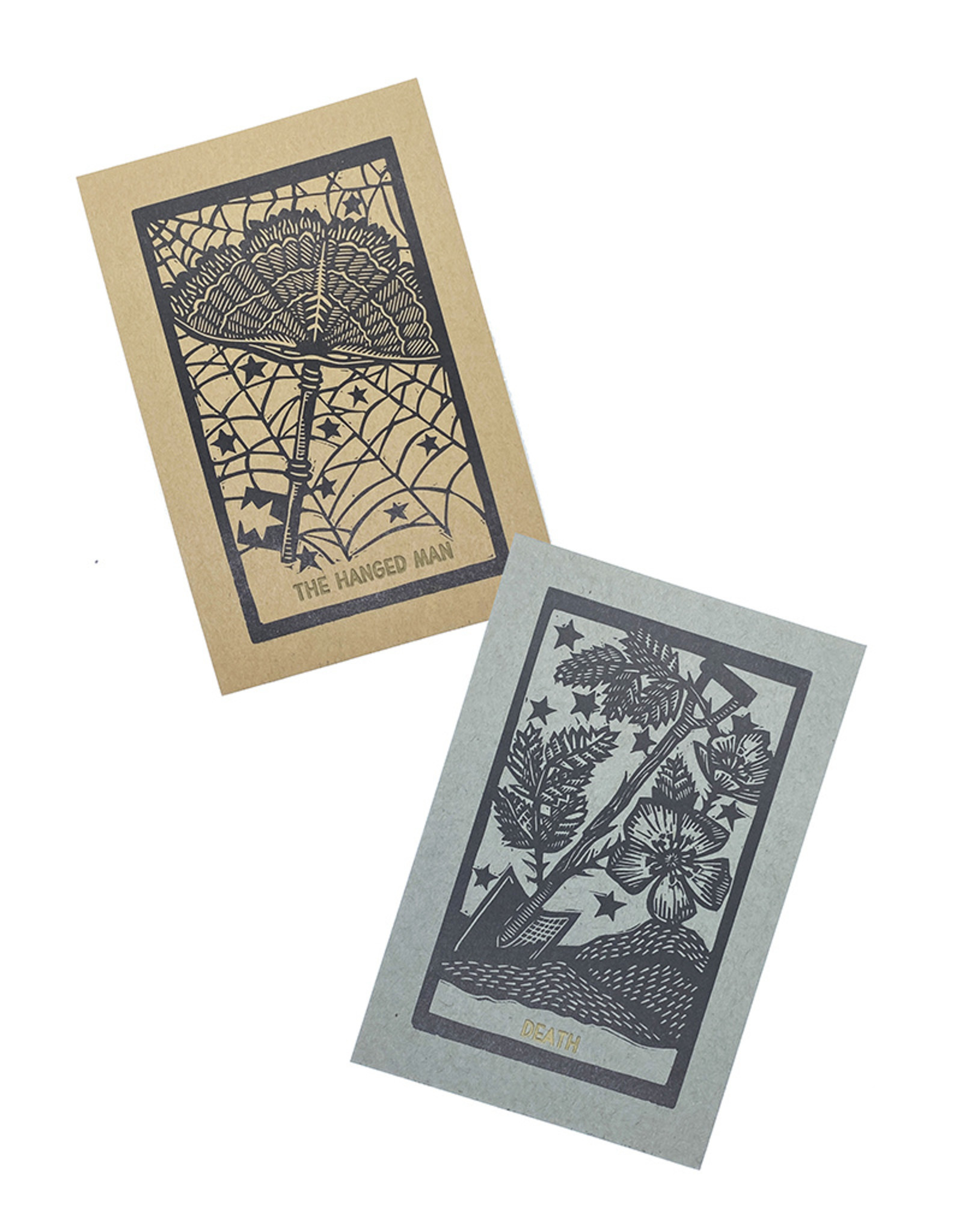 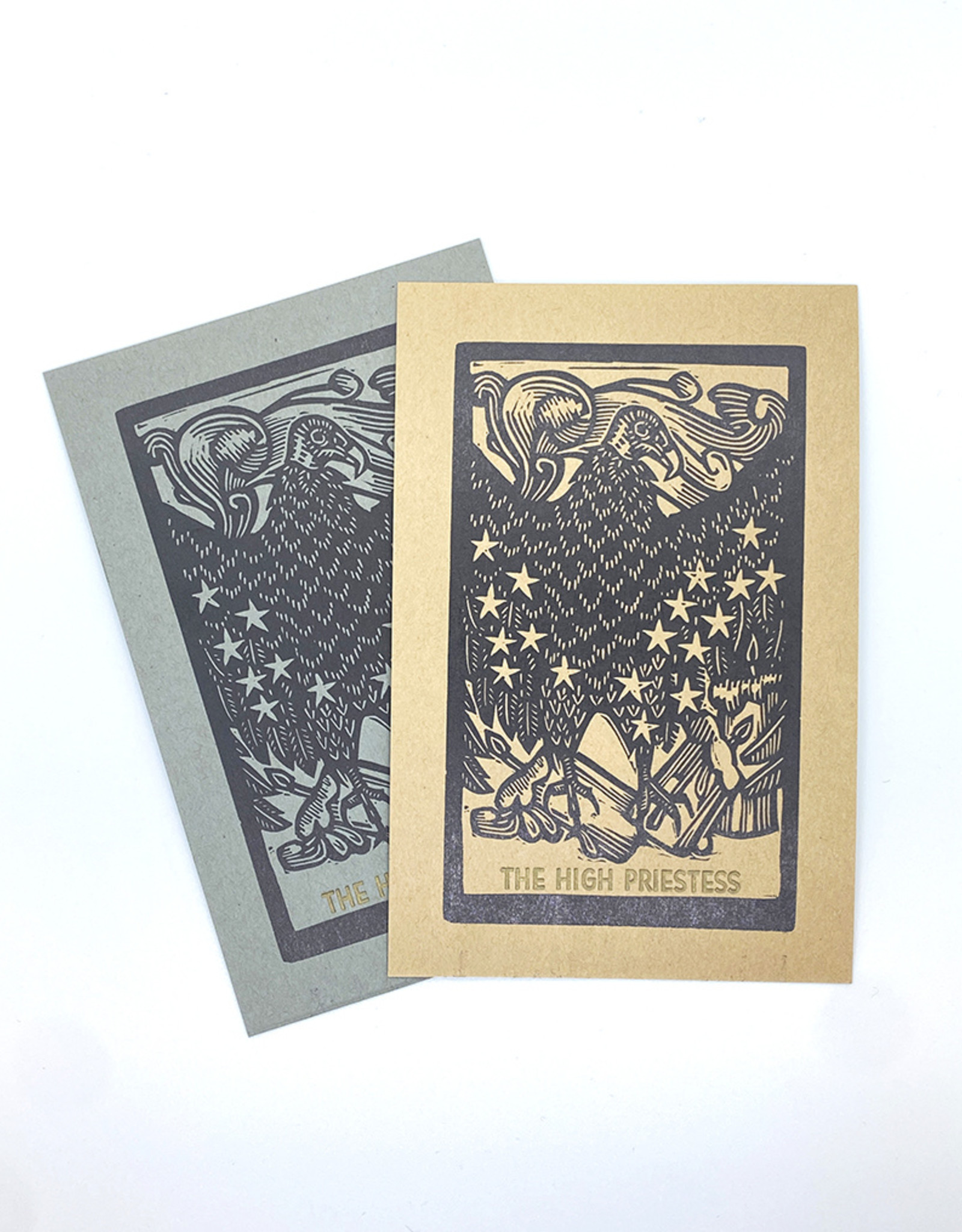 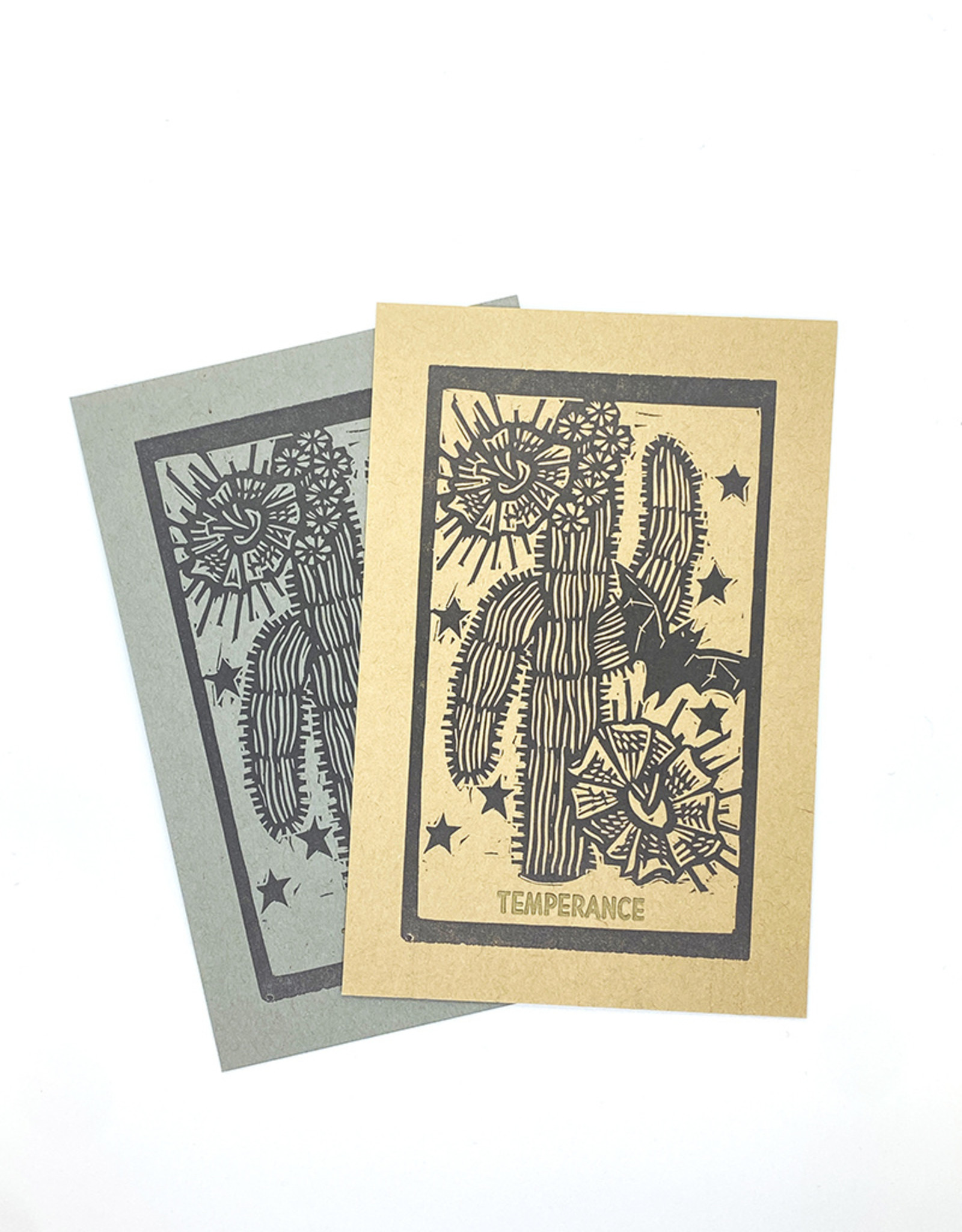 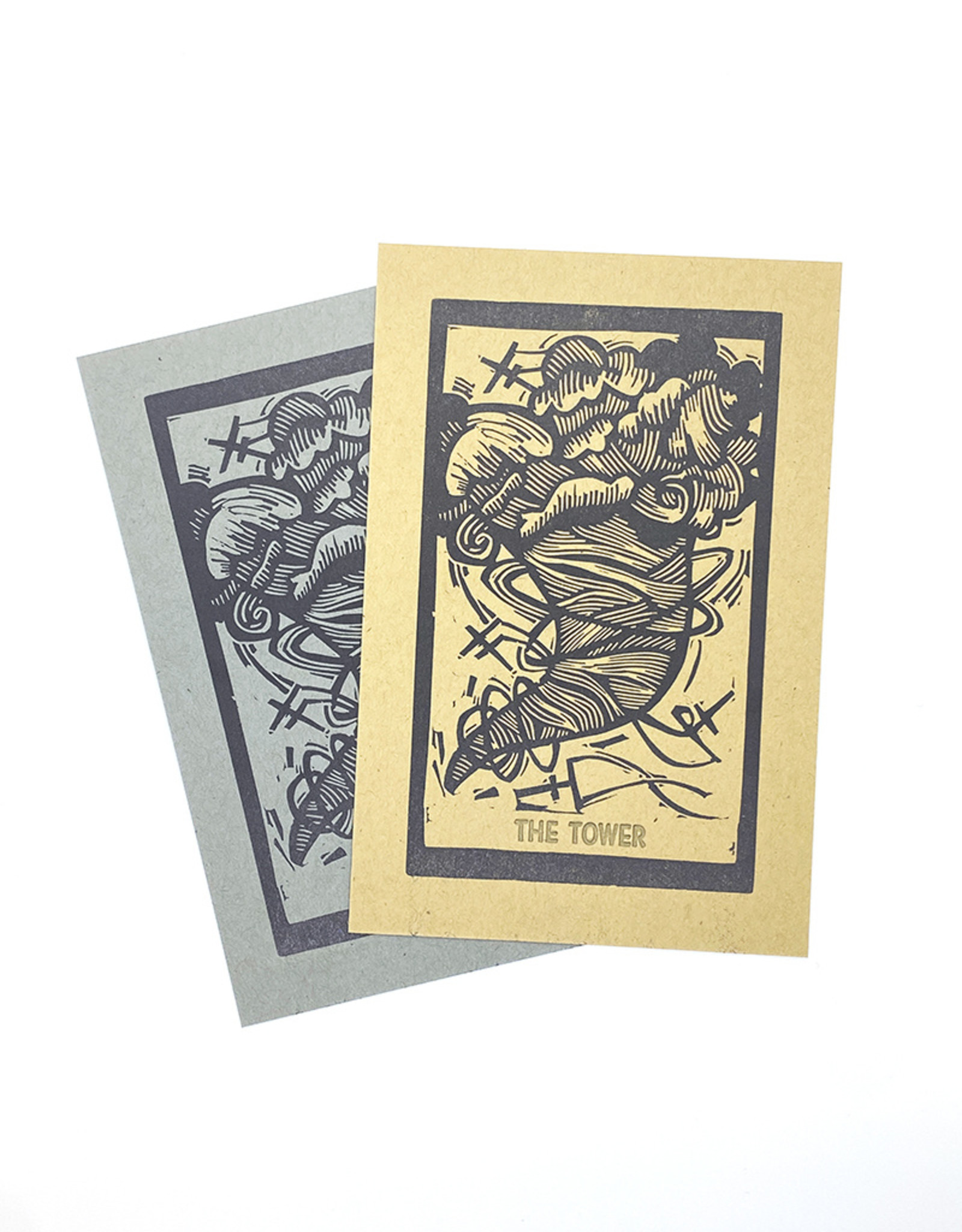 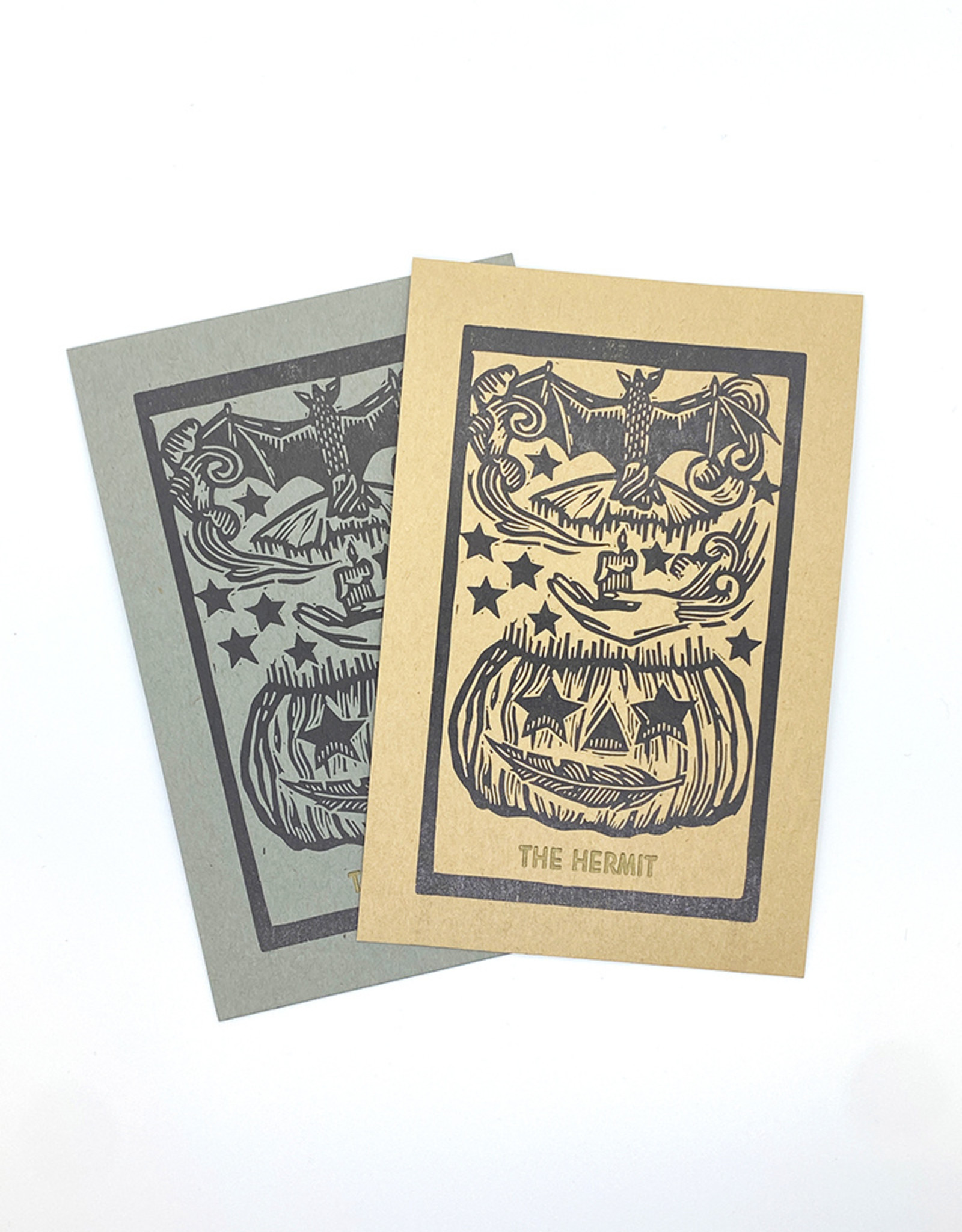 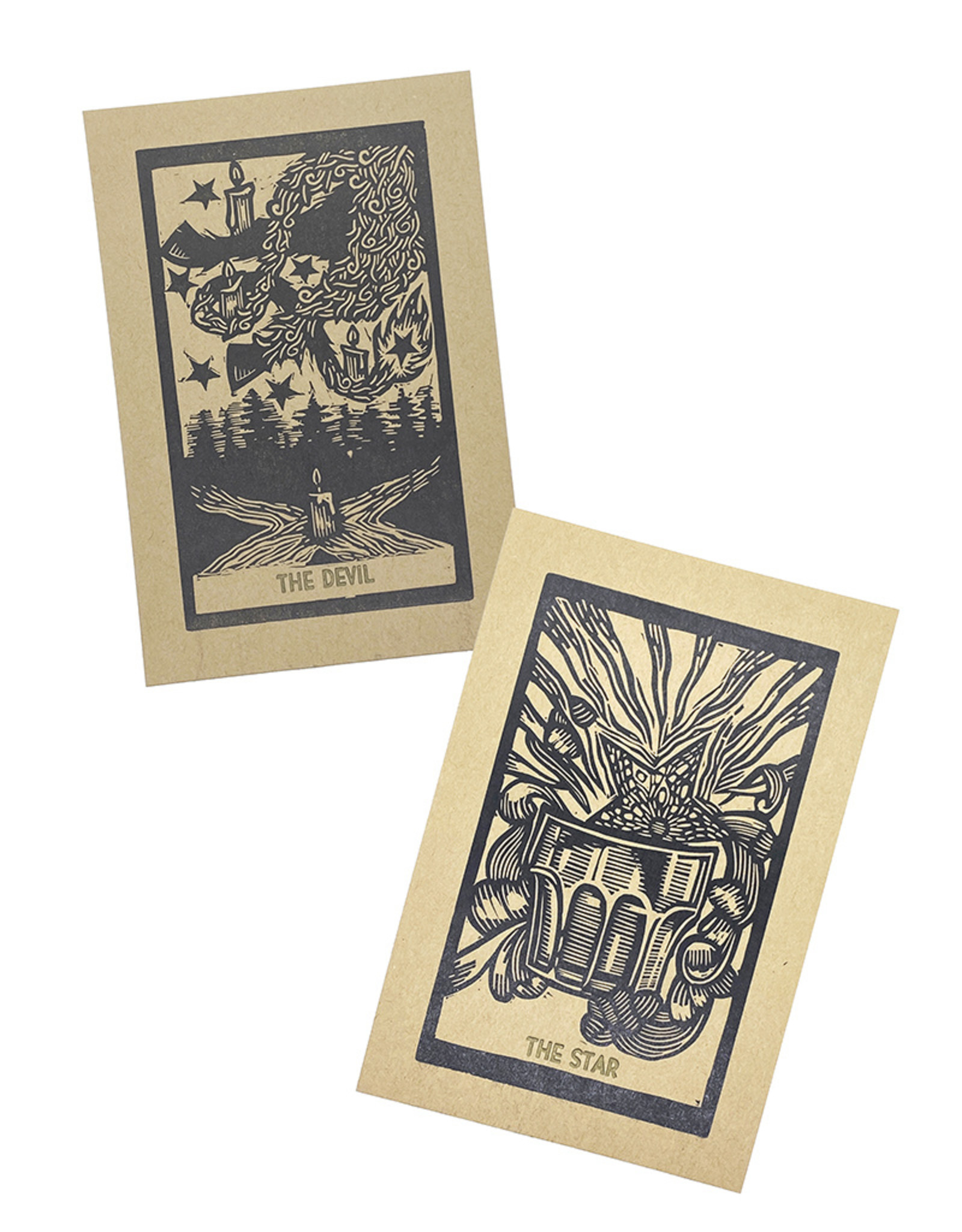 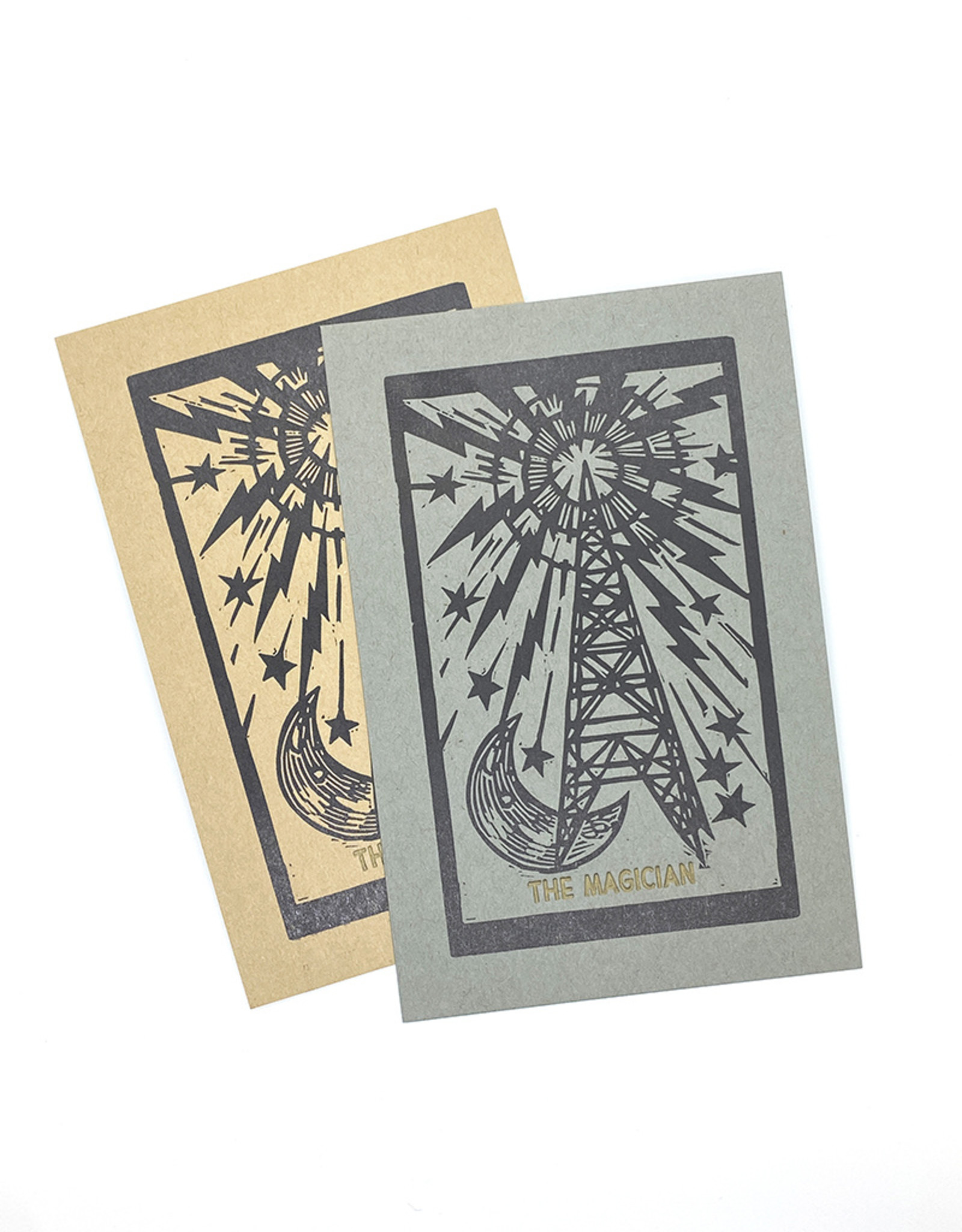 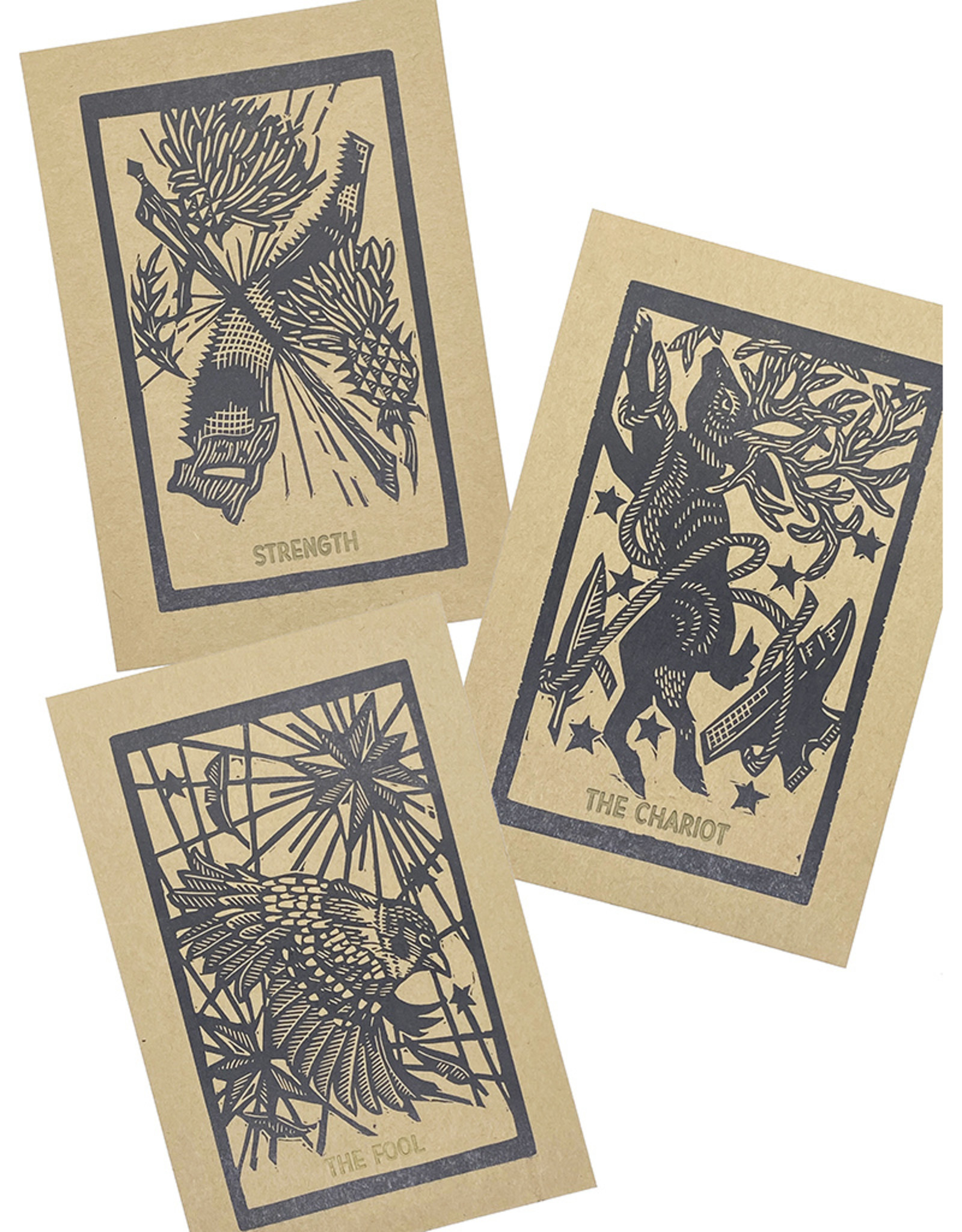 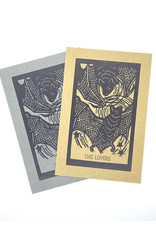 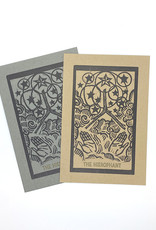 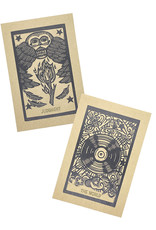 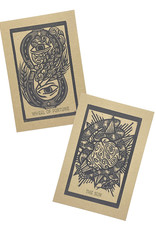 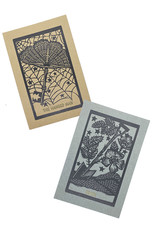 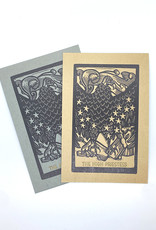 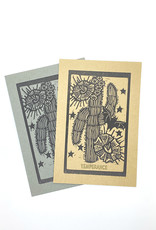 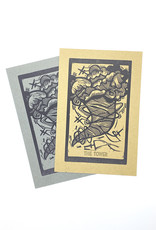 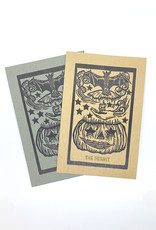 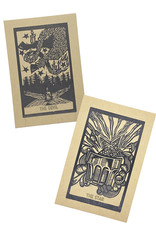 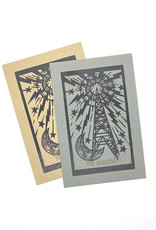 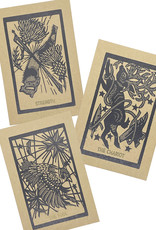 Each print measures 4” x 6” and has been letterpress printed on French Paper Co. archival kraft-toned or stormy grey card stock from an original linoleum relief carving and hand set type.

The Fool: card in my Rural Cosmology Tarot series, the Fool is the card of the adventurous beginner. Youthful and spirited, the fool begins their journey with light provisions and an open heart. this is the card of the restless traveller, the knowledge seeker, and the student. in the deck, this card carries the number 0 to represent unlimited potential and uncertain outcomes. My interpretation of the card features a sparrow taking flight, blessed by the fortune of starlight illumination.

The Magician: A print in my Rural Cosmology Tarot series. Often depicted as an alchemist, the Magician can transmute base metal into gold. the Magician is a conduit between the terrestrial and the celestial, the mundane and the divine. This is the card of artists and creators, the card of visionaries. What better to symbolize the magician than the XERA boarder station? With the power to broadcast music over the entirety of North America, XERA carried the sounds of the Carter Family into living rooms as if by magic.

The High Priestess: A print in my Rural Cosmology Tarot series. The High Priestess resides at the veil between this world and the next, a guardian of occult knowledge. Endeavors of creativity and intuition flourish under her guidance. An unexpected representative, a vulture has been employed to represent the priestess. Known for the consumption of carrion, the vulture deals in the death and renewal. Silent workers, these birds are not unlike mythological psychopomps, ferrying the living into the land of the unknown.

The Hierophant: A card in my Rural Cosmology Tarot series, the Hierophant asks us to question the role of spiritual tradition and authority. Emergence of the Hierophant in a reading can indicate a need for spiritual guidance, conformity, or adherence to set social traditions. the Hierophant may even take the form of academic institutions. The push and pull between divine mysteries and inner free will is represented here through a divining rod. These forked branches used to “water witch” or locate hidden resources serve as an apt symbol for employing a system to better understand the unknown.

The Lovers: A print in my Rural Cosmology Tarot series, the Lovers is perhaps one of the best known cards of the tarot deck. Abundance, attraction, and true affections are symbolized in this card, a positive card to draw, indeed! While the card may most obviously denote meetings and partnerships of a romantic nature, the card may also apply to true friendships or other creative partnerships. Here, the lovers are depicted as bats, magnetically attracted, and intwined by sonar waves of echolocation.

The Chariot: From my Rural Cosmology Tarot series, the Chariot announces victory. Ease over obstacles is indicated by the swift and focused movement of the chariot. This card indicates resolution of physical and financial troubles, and promises balance and control. My interpretation of the card presents the charioteer as a jackalope, a folkloric beast of the American west, the creature itself a strange balance of the terrestrial and the imagined. Bursting through bindings, the creature carries with it a feather and anvil at equal speed. these tokens represent concerns of physical labor, and endeavors of communication.

Strength: A print in my Rural Cosmology Tarot series. Perhaps unexpectedly, Strength in the tarot has little to do with physical prowess. Instead, the card highlights restraint, courage, and balance. Steadfastness in actions and ethical proceeding are indicated by Strength in a reading. To denote the nuance of Strength’s meaning, a singing saw has been selected as core imagery. A popular mail order instrument at the turn of the century, singing saws transform a basic carpentry tool into a surprising and otherworldly sounding instrument.

The Hanged Man: A card in my Rural Cosmology Tarot series, the Hanged Man indicates retreat, suspension, and transformation. The hanged man has surrendered to changing conditions, understanding that current sacrifices will provide future rewards. this card urges you to listen to your inner voice, and to free yourself of excess material baggage. My depiction of the card features a surreal moth, inactive, but possessing both flight and the ability to “unlock” potential. The hold of the web is temporary, a restraint that grants a period of self reflection and clarity of action.

Death: From my Rural Cosmology Tarot series, Death brings an end. Metaphorical instead of literal, the appearance of Death completes a cycle in our lives, bringing about opportunities for new beginnings, and the space for us to imagine and create what we wish to become. Death may herald releasing habits, situations, or people in your life that do not support you, or shedding shadow aspects of yourself. This interpretation of the card presents a shovel planted in a fresh grave, new growth of wild roses springing from the efforts of burial. Grieving of the old self must occur, and self examination slow, but the efforts will be bountiful.

The Devil: From my Rural Cosmology Tarot series

The Tower: A print in my Rural Cosmology Tarot series. The fall of the Tower brings unexpected destruction, shaking us to our very foundations, and stripping away structures in our lives that have been improperly constructed. This card makes a fearsome appearance in a reading, forcing change against our will, and facing us to confront our failures . Similar to death, the leveling effects of the Tower provide us with an opportunity to reconstruct our lives with strength and honesty. Here, the terrifying phenomenon of a tornado takes the place of the falling tower, a humbling and frightening occurrence.

The Star: A print in my Rural Cosmology Tarot series, the Star denotes good fortune, unexpected luck, and clarity. One of the most positive cards in the major arcana, the star brings a flash of needed illumination in the darkest night. In this interpretation, the celestial object crashes down and lands in an old fashioned glass. Luck is overflowing, and things are looking up.

The Sun: A print in my Rural Cosmology Tarot series

Judgement: A card in my Rural Cosmology Tarot series, judgment reminds us that we are all equal before death. Different that the judicial connotations of Justice, Judgment is a call to action to examine our daily ethics and conduct. Depicted in some tarot imagery as the Last Judgement, this card announces that a just life will be met with just rewards. In the tradition of “Memento Mori” imagery, this print depicts Judgment as a death head, a common icon on early American gravestones. Bearing a torch, the inevitability of death illuminates the importance of responsibility in our current actions.

The World: A print in my Rural Cosmology Tarot series. The World card completes the sequence of the Major Arcana, bringing with it accomplishment and celebration. Within a reading, the World can foretell the completion of a project, attaining a favored job, or a successful partnership. Rewards for your efforts are finally coming in. And who can celebrate without music? The World in the Rural Cosmology Tarot is depicted as an LP, spinning in celebration, and depicting the ever revolving efforts and returns.

All images designed and printed by Anne Luben

Anne Luben was raised in Wyoming where she received her BA in Studio Art from The University of Wyoming in 2012. Continuing her education on Fibers & Printmaking she received a MFA in Textiles from the University of Indiana in 2016. Drawing from fantastical sources of visual and narrative culture within country music and western Americana, she employs processes of letterpress and embroidery within her work to propose a magical realist relationship between the embellished garment and the inflated folkloric identity. 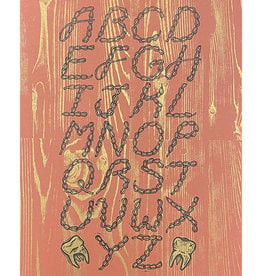 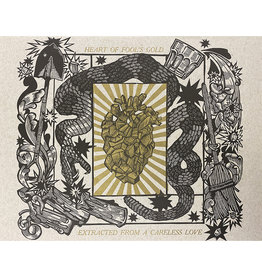 A curio collection of mishaps featuring jostled bourbon, falling candles, a rearing rattlesnake, and a false heart.
Add to cart
Careless Print by Anne Luben
$45.00
Please accept cookies to help us improve this website Is this OK? Yes No More on cookies »